A Better Tomorrow III The conclusion to one of the most successful trilogies in Hong Kong films, this prequel features a different kind of rousing action with auteur Tsui Hark (Once Upon A Time In China) at the helm.

Chow Yun-fat (The Replacement Killer and Crouching Tiger Hidden Dragon) reprises his role as Mark who picked up his skills with blazing guns in Vietnam under the tutelage of the tough-as-nails Kit (Anita Mui, Rouge). Kit falls for Mark but the latter, knowing that his cousin Mun (Tony Leung Ka-fai, The Lover) is in love with her, sacrifices his love for her. But the return of Kit's ex-boyfriend Ching brings things to a head, especially after he bombs Mun's new garage.

A moving story, dynamite action and superb performances from its great casts bring the A Better Tomorrow trilogy to a fitting conclusion. 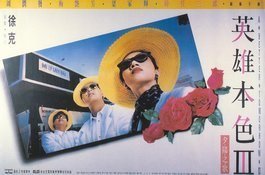