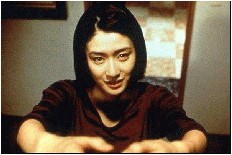 We never totally shared the French critics' enthousiasm around Kurosawa Kiyoshi. We saw him as someone with a real sense of frame and a very original work on sound but never thought he was a Major voice of Japanese cinema just like Kitano was in the nineties. Kurosawa was a B movie lover praising Don Siegel and Richard Fleischer but always wanted to mix metaphysical and B cinema. Although his comment on contemporary Japan's lack of space for people to exist as individuals was worth of interest, it was often conveyed through dialogue or visual symbols in a very heavy, artificial way. Since Kairo's theme is a Japan in which communicating through emails is easier than real contact, it prevents the movie from having this drawback. The screenplays deals well too with difficulties to be in peace with dead people, Japanese culture's theme of people's disappearance. Even the few philosophical dialogues here aren't heavy or pretentious. Kurosawa's touch is at its peak with a still brilliant work on sound and a rythm handled in a better way than in most of his films shown in the West. The only major failure here is the difficulty of characters to exist in an other way than puppets of his vision of the world. The persistence of this major limit of Kurosawa as a director prevent the movie from being really great. But it is still the only movie worth of interest of the Ring wave that is not directed by Nakata.