Beggar So (Stephen Chow) was born a Manchu nobleman. He was caught cheating at the martial arts competition and was stripped of his title and wealth and became a beggar. He saved the life of a senior member of the Beggar's Gang and became their Leader.

Later he foiled an assassination attempt on the Emperor by defeating the leader of the Tian Li Cult (Tsui Siu Keung). The Emperor wanted to reinstate So's former title but he declined. Instead, he was awarded a golden bowl with the inscription, "Alms-begging on the Emperor's order". 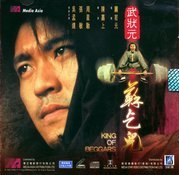