Love on a Diet

A refreshing and touching movie to consume without moderation... 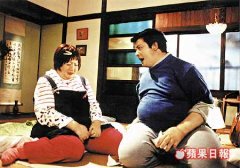 One year after the unavoidable Needing you, Johnnie To Kei-Fung brings the two heavy-weight Andy Lau Tak-Wah and Sammi Cheng Sau-Man together again for Love On A Diet, a romantic comedy of the same kind. I say "same kind", because, despite the fun everyone must've had on the set, the purpose is clear, To delivers us a regular money-magnet-movie. However, the style is completely different. Forget about the more simple romance tries of the first one, forget about the intent to intellectualize a bit the kind ; everything here is accentuated for the fun of some people, to others's great displeasure, wich makes me think that Wai Ka-Fai must have involved himself much more in this one than in the previous one.

But as he shared less, To eventually had to pull up some trick like the others. Because except for a few movies wich, in a lazy creativeness, confine themselves to use well-known codes self-sufficient in box-office matters, most of comic directors or writers (Wai Ka-Fai among others) try to find THE idea or THE concept wich'll bring to the film a touch of novelty, compulsory to avoid deja-vu. And here, it's all found : make of two fat persons the main characters, place the whole in Japan (pretty uncommon) and the movie gets its whit of oddness.

Here, it's the beauty of the heart and not of the body wich bond the two protagonists and that, mostly in the consumer and symbols society Hong-Kong is, is something we should highly pride. It's a fact that the main plot gets around Mini Mo's misfortune to be over-weight, and it's also a fact that Andy Lau, and there lies all the comic reliefs, tries to help her to slim down at any cost.

Nevertheless, all of this is done in a pure entertainment purpose, don't see here any message to fat people, or any echo of the advertising which, there as elsewhere, praise anorexia. First, the story is clear, it's to find her "past life" (and beyond her figure, her lost love) that Mini Mo embarks herself on this extreme diet, in top of that, the romance wich grows between them is really a "platonic" one, or at least a realistic one ; instead of the old "immediate love" or "secret love" tricks, it's a passion that grows from a mutual hostility and wich, charm operating, progressively changes into something more touching.

Andy Lau is extremely good, his costume seems to give him wings (who said irony ?) cause he's never been that funny and that endearing in the same time. His lone wolf fatty role confer him an authority wich, balanced with the weakness and the immaturity of Sammi, creates a true osmosis between their playing. And as the couple works perfectly, besides a few "heavy" gags, the comic as well as the more relevant things at stake involve the audience. You soon oddly wish Sammi to actually regain her long-lost hips & thighs, and given that Andy is as gruff as he's touching, he inspires a bitter compassion mostly when you see all he does for her, without asking anything in return, knowing that he does all this to throw her in the arms of somebody else.

Costumes are a success, especially Andy's one even if hands and some angles betray the gambit, you quickly convince yourself of their appearance though and you watch the movie without paying that much attention to it. The visual direction is very smooth and clean. Maybe it's because of the DVD, however photography seems to be much more neat than on Needing You. The decision to shoot it in Japan is funny particularly when you know how much hong-kongese love japanese soap-operas, continuous "meloromantic" sitcoms, aspect lightly parodied for that matter through the romance between Sammi and her japanese lover (gnawing musics, cliche after cliche...)

In Brief, after his first smash-hit in this kind of opened romantic comedy last year, Johnnie To gets back on track with Love On A Diet, a successful comedy where diet and laughs are on the menu (!). A convincing Sammi Cheng, a top notch Andy Lau, an original scenario, an appealing theme, all of this make of Love On A Diet a fine film meant to be eaten with the eyes.

2.5
typical local romantic comedy...the most interesting thing is the make up of the 2 main characters, which make the appearanc of Andy Lau and Sammi Cheung much fatter than they are. However, the charater of Sammi's is just same as her other movies, an hardworking, innocent girl with serious attitude towards love. It's not a suprising movie.