3.25
I've always had a bit of a love/hate relationship with anime. Quick flashes of artwork reconciled within the plotlines of the larger work have always felt more intrusive than they have integral to the total story, but, as could any reader, there's always something in there worth appreciating. Whether it's the personal history of the lovable lead or the angry clutter of a villain bent on destroying life, some element always gels, fueling the vicarious excitement for as long as I'm willing to suspend disbelief. Then again  when the lead actress is an absolute knockout having the time of her life chewing scenery, slaying bad guys, and decked in spandex, who am I really kidding? The live-action (the term should be used loosely, as the film is full of heavy CGI sequences) adaptation of "Cutie Honey" feels like an idea that originated from anime but desperately desired to rise above the conventions of the literature. In this story, Honey  an ordinary office girl turned super-powerful android by magical uber-genius of her deceased scientist/father  is granted the chance of, well, her second lifetime: she can avenge dear ole dad's death by bringing an end to the notorious Panther Claw gang  but is she willing to risk the lives of her new-found friend, Detective Natsuko Aki (Mikako Ichikawa), in the process? Of course, androids have never been lovelier than this one embodied by Eriko Sato. As Honey, Eriko bears the weight of the film, delivering a performance of a visual marvel: her features strike an almost perfect balance between doe-eyed-anime-schoolgirl-cuteness and drop-dead-gorgeous-comic-book-heroine-beauty. She's perfectly cast, and it would appear that she knows it! She uses her feminine wiles and impish lunacy from start to finish with nothing short of total commitment. Such dedication should give even the most impotent Scrooge something to admire, if not a resurrection of male blood flow. Yes  she's  just  that  stunning. In her capable hands, what could have been a farce becomes a force to be reckoned with. "Cutie Honey" is not without its flaws. The high-fashion, sparkly camp design works well most of the time, coupled with some terrific special effects work. Anime sequences  largely used for flashbacks and battlefield filler  are impressive, but these scenes don't offer much to differentiate themselves from straight anime pictures. Despite or to the advantage of the goofy feel-good banter, the actors all seem to enjoy themselves, as it's clear that no one is taking this stuff too seriously. At some points, I couldn't suppress the "What am I watching?" effect. Normally, a film like "Cutie Honey" is not my cup of tea  but, one scene later, I was drawn up into this goofy world once more, laughing at the campy villains or admiring what little fabric the costume designer refused to waste on Eriko's ordinary-girl-alter-ego outfits. Did I mention that Cutie is a real cutie? In the end, there's something wholesomely redeeming to watch a group of mismatched heroes take time out from saving the world to drink sake, let loose, and sing karaoke. 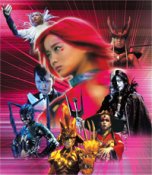