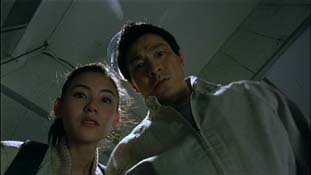 In the middle of the saga Infernal Affairs, nobody thought that Hong-Kong cinema would come out with a movie so risky. Indeed, the philosophical aspirations of the scenario must have confused more than one typical fan of Andy Lau Tak-Wah or Cecilia Cheung Pak-Chi... But inspite of the great (too great for some people) variety of components, the recipe works and you let yourself be carried by this visual & inward journey.

Everything starts with an striptease (integral one !) sequence of a massive Andy Lau in front of a totally hysterical Cecilia Cheung ; at the same time of a scene completely whacked where a contortionist indian escape (and that's not a big word) from the surveillance of a dozen police officers. The two scenes "join up" just after that and we learn that Andy alias Big, a buddhist monk converted as a stripteaser/body-builder (!), is gifted of the ability to perceive one's karma, meaning he can see through people's past lives....all of this during the ten first minutes !!!. And it's the first hour in whole wich'll be like that : crossover of a cop movie and a superhero movie (with a tribute to Spider-Man ?), punctuate with action scenes pretty interesting et topped by a philosophico-buddhist sauce wich divide opinions on this film.

And then, without a warning, the atmosphere takes a U-turn and you suddendly land up in front a movie wich, for once, long for more, without actually succeeding it, right, but wich tries to and it's already a lot. Milkyway Image, despite the quality of their movies, rarely got us used to films bearer of such message, and this is a pleasant change.

It's interesting to note that the karma concept belong here only to asian people (chinese, japanese, indian...) and seems to affect no other culture... Big seems, as the others too, to submit the karma and not master this gift and that way, choose his own fate. SPOILER We still can suppose that he's never seen his own karma and maybe he deserves to lose the woman he loved, Jade, and seven years later Lee Fung-Yee. As we're still in the spoilers, we can also notice that Big and his alter ego give the exact same blows in the final fight, wich clearly shows that all this scene is indeed a struggle against himself inside his very psyche, due to the recent events that trouble him. FIN SPOILER 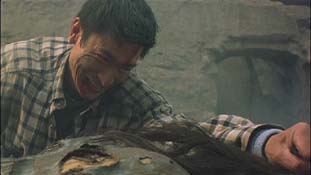 Thus, the movie jumps from an atmosphere to another without losing efficiency, like the moment when Cecilia Cheung commit her scooter to Andy Lau ("I'm good at arcade video games", he says !) who drive the machine as the rookie he is, falling in every bend of the road....tremendous !

Andy Lau is imposing in his monk-bodybuilder-superhero role. The relation he shares with his sifu is amusing ; he treats him with a lot of respect but doesn't hesitate to light up a fag right after his master precise him before leaving : "no alcohol, no meat, no tobacco". His body amaze but is well-made enough for us to quickly get use to it. I think that this titanic body must have some signification in buddhism or maybe in a chinese legend, because he gain it in only one week through meditation wich open his mind to the karma at the same time... Cecilia Cheung is always very fizzy and play a CID agent a bit on the skids. 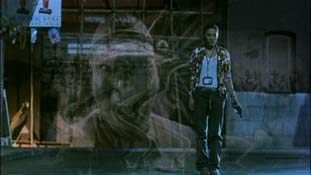 The direction is fancy and we get the "Hong-Kong by Night" shots, typical of Milkyway movies (Running out of Time, PTU, The Longest Nite, The Mission...) ; empty streets where the animated life of the peninsula leave it to the protagonists nocturnal activities. In the last third of the movie, we can also admire some outstanding chinese landscapes, wich comes at best with the spiritual quest that Big goes into. Except a soapy song at one moment, the score is really calm and spiritual such as the las part of the film.

In Brief, whether you like it or not, Running On Karma dares and revolutionnize in its own way the codes of cinema wich, like everywhere else, has, in theory, to lay a few successful components to make a smash hit out of a film. Anyway, we hope that in the future, Hong-Kong studios will score more tries of this kind wich is transformed for many.


Milkyway running out of ideas? Definately not!

After a funny but silly "costum" movie (Love on a Diet), Milkyway Images changes the fat into muscles for another movie with Andy Lau. So what ? Another silly comedy quickly forgotten after the first view? But the Milkyway spirit is not dead, and instead of releasing another bankable comedy, Johnnie To delivers an undefinable movie three days before the more awaited Infernal Affairs 2. Crazyness? Maybe, but the result is here: Running on Karma achieves better box office results than his competitor, and will surely not convince everybody, but will surely surprise and confuse. Those who didn't see it yet should avoid the following paragraphs and read just the last one in order to keep a "virgin" mind before seeing it.

Fans of the HK crazyness of the 80's and 90's will maybe drop a little tear watching such an undefinable movie. Starting like a comedy, switching to cop movie, moving to action, changing to romance, falling into a drama, Running on Karma is like nothing Milkway has done before. It mixes so unmatchable parts that it requires a lot of talent from the cast and crew to make all "this" efficient. But people at Milkyway are talented, and this first crazy hour is very efficient and surprising. But not content with surprising the viewers, Johnnie To changes the tone for the last third, and brings some philosophy in the story. Running on Karma is just simply a crazy movie, but a meaningful crazy movie. It's just what viewers loved with the first Milkyway movie: it's unpredictable, and rewrite cinema in its own way. But it also goes a little bit further by adding a message inside the story

Of course, everything is not perfect. With some many genres, so many wrong tracks, the viewer may get lost from time to time. Some of those wrong tracks could have been interesting to follow. The special effects are not always perfect (the costum of Andy Lau is impressive, but much more difficult to make realistic than the fat one from Love on a Diet, as there are often no clothes to hide the defaults). The first two thirds have much more rythm than the last third. But this is the last third which makes the movie really unique and meaningful. It's just that not all the viewers will be able to switch their mood as fast as the movie. Also, Cacine Wong was maybe not the best composer for this movie, but the usual composer for this kind of movie at Milkyway (Raymond Wong Ying-Wah) was not available. The score is not bad here, but it's not memorable neither.

Despite those lacks, ROK is still a must see. Because Johnnie To knows how to shoot almot any kind of cinema. Because Milkyway Images still knows how to be original. Because Andy Lau has become another actor in the hand of Johnnie To. And simply because to be truly surprised by a movie is rare enough nowadays to give a chance to such a movie.