Chan Wook Park impressed me greatly with his debut JSA a slow burning political thriller that seemed like one of those old school Hong Kong brotherhood movies with a military twist and slowed down a few notches. Sympathy for Mr. Vengeance the next effort shares similar pacing to JSA but in other respects could not be more different.

Sympathy is almost a horror film. Not in the conventional sense but certainly it is horrific in parts. While with directors such as Miike every new extreme is expected, if not prepared for, by past efforts Sympathy comes out of the gate running and kicks you straight in the teeth with its unflinching violence and the desperation and irony of its tale. 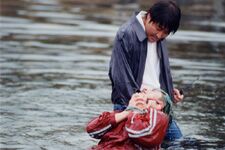 The story of a Deaf mute who is laid off from his dead end factory job who resorts to selling his kidney to black market traders to raise the money for his sisters operation. Of course things dont go smoothly and he wakes up kidney-less, broke and even more desperate. With his girlfriend, a suspected terrorist he hatches a plot to kidnap the young daughter of the factory boss, but things go tragically wrong, leaving the Boss (Kang-ho Song who brilliantly played a North Korean Sgt in JSA and you may recognize from Shiri ) lusting for revenge.

Sympathy is an outstanding movie while still being a hard film to like. In this respect (althought not plotwise) its a little like Hana-Bi (which I find hard to watch as much as I love it) and much like more western films such as Irreversible in that its a dark and often depressing journey into tragedy and despair and has to be appreciated more for its lovely plot touches and masterful direction than as a piece of entertainment. This doesnt stop it being a movie that can be appreciated with many viewings. Some parts for all their brutality and hoplessness are outstanding and stick with you for a long time after.

There is one scene I will always remember where a group of youths are sat in an apartment, ears to the wall, masturbating over sexual noises coming from the next room. Amusing until you realise it isnt sexual at all but the main character (Ryu)'s sister writhing in agony on the floor, in pain from her illness. The most striking part of this scene - and indeed the film, is the subtleties. Rather than ending on that note the camera moves to show Ryu standing with his back to his sister, a smile on his face, ignorant to what is happening behind him. 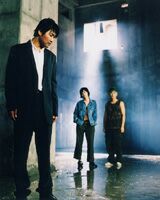 The movie is filled with many such shocking and heart breaking moments. The scene with the father and kidnapped daughter in his living room is one of the saddest scenes I have ever seen. The movie with its cruel irony and refusal to compromise its visceral style and tragedy for the comfort of its audience is one of the saddest movies over all, but not at all in an emotionally manipulative way.

Definetley not for the weak of stomach, and definetley not a movie for the happiest day of your life, but nevertheless essential viewing. Can't wait for Chan wook Park's next movie, Oldboy.