You're talking too much, man... 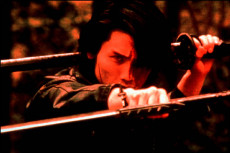 Yes, Versus talks too much, too much for a movie trying to be the ultimate actioner. We didn't ask it for having characters or transcending the genre like the Killer did. Just for being an action movie with action. And it talks, it talks but it says nothing. Kitamura tries to make the spectator believe that something's going on outside the action scenes and so his movie is remiding us of the useless dialogues written for us blockbusters in order to reach the reglementary length of two hours. The acting? From the Johnny Depp clone to the yakuza and the lady playing as if they didn't know the movie would be shown in thetres, all of them seem somewhere else. And the action? The movie mixes leonian close-ups, wooian slow motions, Dogma like filming and it's not creating a personal style. Just the way the mix between action, chambara, martial arts and zombie movies doesn't create anything either. The only merit of Versus is to point out how much Blade 2 was achieved by managing the synthesis of elements from us and Hong Kong cinemas and talking not too much, while being funny when it talked.

3.5
In early 2004, Zack Snyders remake of George Romeros legendary DAWN OF THE DEAD (© Universal Pictures, 2004) bumped Mel Gibsons THE PASSION OF THE CHRIST (© Twentieth Century Fox Pictures, 2004)  ironically another film about a man who would eventually rise from the dead  out of the Number One top-grossing box office spot. I guess this only goes to show you that you cant keep a good dead body down. It's hard to describe VERSUS in conventional terms: think of it as Director Sam Peckingpah directing THE EVIL DEAD meeting CROUCHING TIGER, HIDDEN DRAGON starring Bruce Lee at the top form of his  but re-envisioning the whole story with a stronger background in mythology, mysticism, and gangsterism. Its THE GUNFIGHT AT THE OK CORRAL only the bullets cant kill anyone. Its HIGH NOON where the bad guys just keep coming back. Once the viewer figures out what's going on, VERSUS plays out admirably in its light wonderful, high spirited, blood-filled camp: Prisoner KSC2-303 escapes with another inmate and flees to an average-looking forest where a rendezvous with a group of men who are supposed to aide in their escape goes awry. These men arrive with their own female hostage, but, before the group can agree on the best way to safety, one of the inmates is killed, and KSC2-303 runs with the girl into the woods. As luck would have it, these are no ordinary woods: in fact, they belong to the Forest of Resurrection, one of the 666 Portals on the Temporal Plane located on the planet Earth. Inside the forest, no one can die without facing re-invigoration as a gun-toting, sword-yielding zombie  except for our three nameless principles, all quasi-immortals, who cant seem to avoid running into one another. The next 90 minutes is an endless battle/hunt/fight for survival. For all its foibles, "zombiehood" never looked so aerobic. VERSUS is filled with dazzling, videogame-style camerawork. Its a late night horror serious spoof brought to unimaginable newfound light. Its a Saturday morning Creature Feature updated for the Attention Deficit Disorder crowd. Its Bela Lugosi on serious acid. Ryuhei Kitamura  cementing his reputation as a director of unusual action/horror/fantasy films  gets great mileage out of quick shots of incredibly energetic fists, guns, and swordplay. The make-up work is exemplary, if needed. When comical, the film is comical. When serious, the film is serious. The actors all appear very much at ease in what seems consistently to be moments of utter ludicrousness or absurdity ... but, rest assured, it all makes sense in its own sort of violent, mystical, cosmic way. Ultimately, the story is far more about the pursuit of inevitability than it is about anything else. The universe has always had a circular logic  life begets death, death begets life, etc. To search for greater meaning in a film filled with comic moments so bloody that you cringe over and over again is pure folly. To search for purposefulness in a film so enamored with offing each subsequent zombie in a more elaborate way is even greater ridiculousness than the film superficially purports. For all of VERSUSs troubles, Kitamura does a better-than-average job keeping the action at a frenetic pace once all Hell breaks loose, and he doesnt allow it to let up until the faux-epic conclusion ... followed by one more faux-epic epilogue destined to keep the viewer guessing through another viewing. Possibly dismissed as little more than just kung-fu fighting immortals of death, VERSUS manages to presents a relatively complex, woven series of events that seemingly -- for all defined intents and purposes -- must play out again every 99 years (give or take a few hours) within the Forest of Resurrection in order for humankind -- or, at least, the lives of these nameless characters -- to maintain a meaningful balance. While most proponents to violence in movies abhor excessive force because it lacks any moral justification, one could argue that  within the universe VERSUS proposes  the violence is necessary. Sure, it may be gratuitous, but were talking about preserving existence of an entire world, here, and not just a few, arbitrary individuals who happen to stumble into such a quagmire. Given the fact that most zombie flicks deal with little more than scantily clad women running for their lives from brain-eating reanimated corpses, is a little creativity so bad? Pop some popcorn. Turn off the lights. Pull the blanket up real tight. Feel the chills, and chuckle your laughter. VERSUS is here to stay.

3.75
The best thing about this movie is that you can see how creative some people are with just a digital camera I think it's just a matter of time until Hollywood ask Mr Kitamura to direct a big Hollywood production My only critism is that this lacks originallity this basicaly rips off a number of movies like the Matrix,Evil dead, and so on But hey still some great camera work and some nice splatter scenes I still recommend it


Swords and Guns in the woods.

2
Kitamura is a bit crazy. When you see what he does with a movie such as Versus... you'll probably reach this conclusion. It's hard here to speak of a scenario - two fugitives are trying to escape from a mob gang and end up near woods... after some fight, they discover that the deads are coming back to life in that place. And there's a girl to protect, an evil spirit, and some more, some more... Basically the whole stuff is nonsensical. But the shooting scenes are entertaining - you watch it just like you would watch a video game - or a bad american movie : you can leave your brains at home before hand. So, it's fun, yeah. It could have been better though : the dialogs are pretty stupid ! Kitamura probably had an idea first of guys fighting zombies in the woods in the first place, and then he tried hard to make a story out of it. Needless to say, he failed to create one. So what's left ? well, the style, the humour and the general bad taste makes it worth a look/laugh. you should rather see this as a comedy/parody. So there you have it : you can have guns and be harmless nonetheless... :)