One and a half hour pleasure

How should I describe this film? Of course it's an historical and an action film, but it is only one part of what this production offers to the spectator. For myself it was more like a emotional and sensitive experience. The blend of speed changes, noises, music, colours, movement of the clothes gives you the impression to be in the middle of the action.

The story is also a big factor for the success of this film. With the time and the explanations, we discover what heroes really are. And that, not only through the fights, but also through the evolution of the colours and the sentiments of the actors. That way the really extravagant choreography of the confrontations is no more so disturbing. 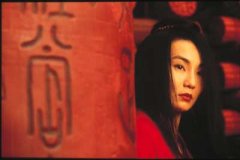 Red : Anger
- It is indeed true that Hero is politically correct in the tone that's taken to treat this story, which eventually reminds us where are we : in China where it's a apparently a good thing to choose a "border line" treatment, close to what could be called nationalism. 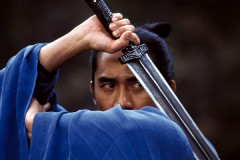 Blue : Respect
- The movie is just gorgeous, too much for some people, from actors playings, costumes, sceneries and musics (the use of the erhu (chinese violin) is tendentious but harmonious nonetheless) to martial arts choreograpies, photography and direction. A visual and artistic jewel. 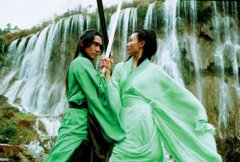 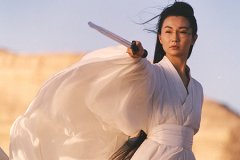 White : Truth
- This film is a masterpiece in its own style but that, is nothing more than my personnal and completely subjective opinion. The truth however, if there's one, is that Hero, wrongly overshadowed by a persistent Crouching Tiger, Hidden Dragon although far less close and representative of the chinese culture and imaginary than this Zhang Yimou's, maintain a new epic sword films style. 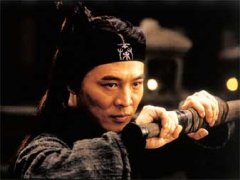 Black : Hope
- After the huge success of CTHD everywhere in the world, after a quite proper exportation of this one and mostly in view of coming chinese/hong-kongese productions, Hero applies if not define, codes of a genre that seems to be the one of tomorrow. 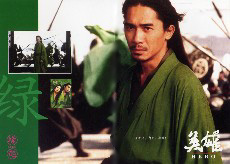 Hero will surely not be praised by everybody. Hardcore HK fans will find it too slow, too "big", just like Crouching Tiger Hidden Dragon. In fact, Hero has all the advantages of CTHD, without its lacks. Where CTHD was mixing occidental parts with oriental ones, Hero sounds more chinese. Where CTHD's rythme was a bit uneven, with its flashback breaking the storyline, Hero is surprisingly well written and original. It succeeds in mixing several aspects (martial arts, politics, love story...) where CTHD was not coherent enough.

Of course, Hero isn't the perfect wu xia pian. From a political angle, everybody can guess the ending, as the movie was produced with chinese money and for the chinese market. This is the biggest lack of the movie: the movie can be considered as a thriller or a chess game (between the king and the killers), and you already know the ending... Quite disappointing, isn't it ? Then there is this slow pace, typical of all Zhang Yimou's movies. It's a bit disturbing for a wired Wu Xia Pian, as most people are more used to 90's crazy HK movies than to CTHD non-typical rythm... You can also add a music too close to the same CTHD to be convincing, two uneven supporting characters (Donnie Yen, too shot, Zhang Zi-Yi, lacking varierty), and of course the Ching Siu-Tung's madness, stunning for fans, too unrealistic for the others... 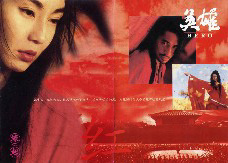 Once you accept those little drawbacks, then welcome in the Wu Xia Pian of the XXI century. Visually, Hero is probably the most beautiful WXP ever made. With Christopher Doyle's cinematography, Zhang Yimou's directing and Ching Siu-Tung's crazy choreographies, you've got your dream team. Add convincing actors, an interesting story with several point of views and philosophical topics, and you are close to perfection. The political content is sadly polluting slightly the martial philosophy, but it's nothing so serious. Hero is also succeeding in integrating a love story into a martial content, which is extremely rare. The extended version will maybe develop those two aspects (romance and martial arts) even more.

However, never forget that it's a visual movie, the story is nothing that wonderful, it's just that I was expecting something much more simplistic. It's the fights which are making the movie truly incredible. With a comfortable budget, Hero can show what no Wu Xia Pian before was able to do. When in a typical HK WXP, you will have 200 soldiers as an army, here you can have 200 000. And even better, when in an old HK movies editing tricks were the only solution to create all the crazy moves invented by the action directors, here Ching Siu-Tung can go further by using CGI. Hopefully, it's not all about blue screen, but more about deleting the wires digitally. It still looks like Ching Siu-Tung style, with a lot of slow-mo and without editing tricks. As Siu-Tung was obviously the best possible choice for this movie, the result is stunning. Yimou wanted an eye-candy movie, Siu-Tung offers some of the most beautiful Wu Xia Pian moves ever scenes. The fight between Maggie Cheung and Zhang Zi-Yi is one of these totally unrealitic scenes where the utility of movements is replaced by their beauty. Siu-Tung was also the best choice because of his unique skills in transforming a normal actor into a martial expert. Tony Leung and Maggie Cheung don't look bad at all compared to Jet Li and Donnie Yen. And they add some excellent dramatic performances into the action.

Overall, all the Ching Siu-Tung fans will surely enjoy Hero, as well as those looking for some martial philosophy (who talked about Duel to the Death?). However, one thing shouldn't be forgotten: Hero is not a HK movie, it must be seen more as a Chinese WXP, with its advantages (money mainly...) and disavantadges (political angle, Yimou slow rythm...). It's another kind of Wu Xia Pian, just like Ashes of Time was, visual before anything else. Hero pleases the eyes, and a little bit the brain. 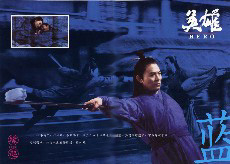 If i had to sum up why Hero is boring, it would be because it's too slow: there's suspense in the movie but its rythm ruins it, just like it ruins the elegant madness of Ching Siu Tung's choregraphies. As for the actors, they oscillate between inexpressivity and "trying to be shakespearian" outrageous playing, especially for the one who plays the emperor. The end is too much politically correct but this ain't the worst: the worst is the music mixing bad copy of Crouching Tiger, Hidden Dragon's violins, bad new age music, unbearable percussions and chords so emphatic they sound like the ones of the Red Army. For the worst it's a panasian blockbuster and, while its themes are more local than in Ang Lee's movie, it has ultimately the drawbacks of US blockbusters.

4
Heros main flaw is to follow the way paved by Crouching Tiger Hidden Dragon. Of course the comparisons are justified, as they are both big budget period epics set in China, revering the literary and cinematographic martial chivalry tradition that predominated throughout the 60s and 70s, but once you get passed this quite compulsory generic definition, Hero offers a number of unprecedented particularities which should definitely be appreciated.It is a rare thing for a script to delve into the remote origins of a country's nation, and if it's not prehistory strictly speaking, the film refers to a state of preliteracy, as the languages were then as numerous as the conflicting interests throughout the land, a Babel Tower of some sort. I therefore found it a very successful insight on Zhang Yimou's part to give language

and calligraphy such a central stance in the film, giving a very cunning words/sword ballance to the whole film (I guess nobody expected mere swordplay anyway), culminating of course in this new shaping of the word "sword". The word itself becomes as lethal a weapon as the object it is supposed to represent, the king only understands it too well, and it is by bringing about the huge reforms referred to in the film that he will sustain his power and give unity to what would be known as China. There are many other things that relate to this notion of words in the film, namely the different stories Nameless tells the king in order to reach his goal. Obviously we see him wielding his sword all through the movie, but then at the end you realize he hasn't shed the faintest drop of blood, and when he finally strikes the king, he does it with the handle in order not to harm him. It is Nameless's use of words, not swords, that makes him a hero. I think the process is somewhat different from that used by Kurosawa in Rashomon, where there was a specific case which needed to be resolved ; here there are simply stories made up from scratch, but which have a specific purpose. All these fight scenes end up being mere lies, all this chromatic debauchery a fraud. This somewhat justifies the unbelievable aspect of the fights (for those who may still not be used to this kind of wire-fu), and even explains some peculiarities in the editing of those fights (which might furthermore result from the international editing of the film). It also has to be considered that Zhang Yimou had no experience in filming these kinds of fights until then, but he proves in many instances that he is action-literate (Zhang Ziyi's dive from skyhigh with her twin daggers is the same performed by Hsu Feng's character in King Hu's Touch of Zen), and I think he actually succeeds in blending these action scenes into his style, even if I was a bit disturbed by the overabundance of the slo-mo.I would finally tend to prefer the substance of the film rather than the exuberant style, and I still consider Raise the Red Lantern as Zhang Yimou's ultimate visual masterpiece, but I'm very keen on seeing what his subsequent experiments in martial epics will look like.

5
I saw "Hero" on my birthday,9th of march,and that was my biggest present to me,because I've saw the movie,which is near to perfection(including "Crouching Tiger")!Yimou has created a movie,perfectly directed,visually stunning,terrificly performed,with a great cinematography and breathtaking fight choreography. He's a real master! "Hero" dazzles with its visuals and fight scenes,because they're brilliant.The cast is fantastic.Here we've got the best asian artists-Jet Li(Nameless),Zhang Ziyi(Moon),Maggie Cheung(Flying Snow),Leung Chiu-Wai(Broken Sword) and of course Donnie Yen(Sky).All of them has made a great performances!Te cinematographer Christopher Doyle has made something very amazing and impressive,the fight choreographer Ching Siu-Tung has made the fight scenes to look stylish and spectacular,the script is smart and deep. There are some bad things about "Hero": 1.Despite the good choreography bu Siu-Tung,the fight scenes are too slow on a moments and too short.In a word unsatisfying.Next to Yuen Woo Ping's fight scenes in "Crouching Tiger",these look like a ballet,witch isn't good! 2.The visuals looking great really,but the bad thing is that they look also fake on some scenes. 3.The CGI effects aren't first-rate at all.(for example:The scene where Li and Cheng save the chaligraphic school from the arrows and the scene with the fighting between Li and Yen,where Yen spread water with his sword.) But no metter those bad things,"Hero" is amazing! No doubt to me it is the best looking movie of all time.This martial arts epic has got a great philosophical story,brilliamt acting,stunning visuals and marvelous fight scenes.It's a MASTERPIECE!